This article first appeared in Yield matters on 02 August 2016

In the last of this series, focusing on how sensitive XTBs are to changes in yield I turn my attention to how each XTB actually performed and what features contributed to that performance. The study of what produces the return is called “attribution”.

In this article we will cover how an XTB produced a one year return of 12.92% and why…

I believe this is important exercise. I believe that investors can earn attractive risk-adjusted returns by holding XTBs.  The exercise of attribution lets them know just where the return is generated.

Let’s look at an example:

The XTB investor in YTMQF3 should earn 2.79%¹ p.a. (5.46% – 2.67%) more than they would in the government bond, assuming both borrowers honour their obligation and the securities are held to maturity. I can ‘attribute’ this expected out-performance to be from the ‘credit premium’ earned by having exposure to the underlying Qantas bond rather than the government bond.  You take more credit risk with Qantas than the Government.

But how did each investment actually perform after 1 year?

Again, an important question because XTBs are liquid and investors can access their cash if required by selling.

The actual results after a year were:

So where did this extra return come from?

How did I calculate this?

Mathematically this can be described as:

I use this technique to attribute the different elements of performance as I think it helps to understand an XTB’s overall performance a little better.

When an XTB under-performs a government bond

Unlike the Qantas XTB, YTMAWC under-performed the relevant government bond.

The relevant government bond returned 4.34% and YTMAWC returned 1.48%.  Our models allocate negative 4.75% to a widening credit spread (not tightening like Qantas, because the Alumina bond price was falling and so its yield increased relative to the government bond).  Add 1.89% from positive carry (again, income differential) to give a total return of 1.48%.

Mathematically this can be described as:

Please note this is the return if you bought the Alumina Bond XTB on 30 Jun 2015 and then sold it a year later.  If you held it to maturity and Alumina meets its obligations then the XTB would produce a total return (YTM) of 4.18%¹ p.a. which is the YTM you purchased it at on 30 Jun 2015, which would be 1.97%¹ p.a. above the relevant government bond.

Know when you’re getting your capital back

One of the core benefits of bonds is that if you hold to maturity, it doesn’t really matter that in the intervening period, the bond price fell (jumped in yield), because it will come back to par value anyway at maturity.  This is unlike equities where if the stock falls, you have to wait for it to recover.  With a hard maturity date – you know when you’re getting your capital back. 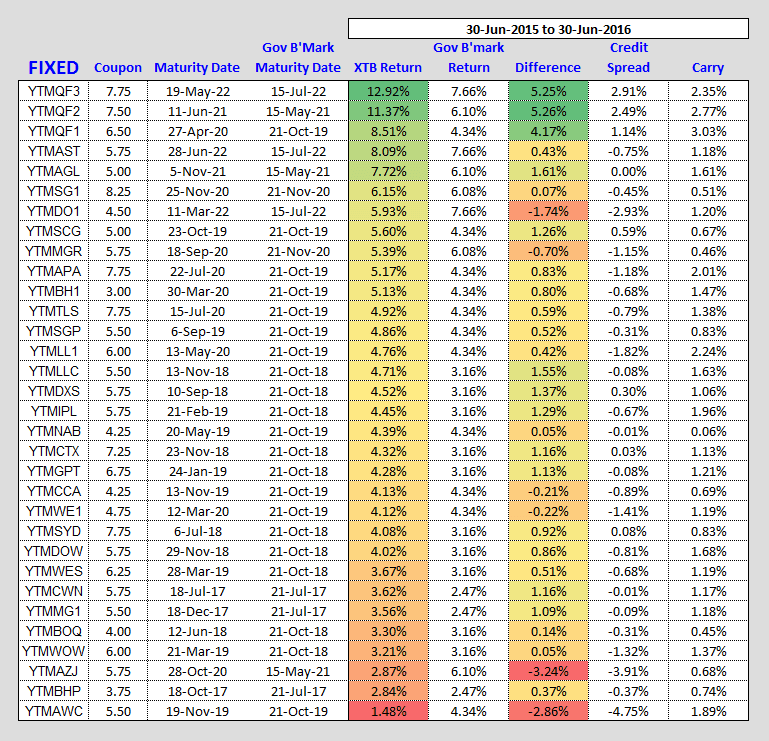 One of the definitions of attribution is ‘where the return of the security is decomposed into the contributions of common risk factors plus a residual²’  What this means is you try and measure what you want and there is always a little bit left over you are not sure about. In this study I have measured the one year performance of XTBs vs relevant government bonds. Government bonds and government-like bonds make up approximately 87% of the composite index.

XTBs bring transparency and access to the corporate bond market and we believe it is important that investors can choose their own XTBs or a portfolio provided by their advisers.

We can work with you to generate specific analysis and portfolios to meet client requirements.

Ian Martin has over 30 years’ experience in fixed income markets globally. Prior to the formation of ACBC, Ian held the position of Head of Rates Australia and New Zealand for Deutsche Bank Australia. He was a member of the Australian Financial Markets Association (AFMA) Market Governance Committee, a board member of Yieldbroker and a member of Deutsche Bank’s Global Rates Executive Committee.

Useful links – Previously in this series

¹This calculation assumes that coupons or interest payments can be reinvested at the same rate as the YTM.